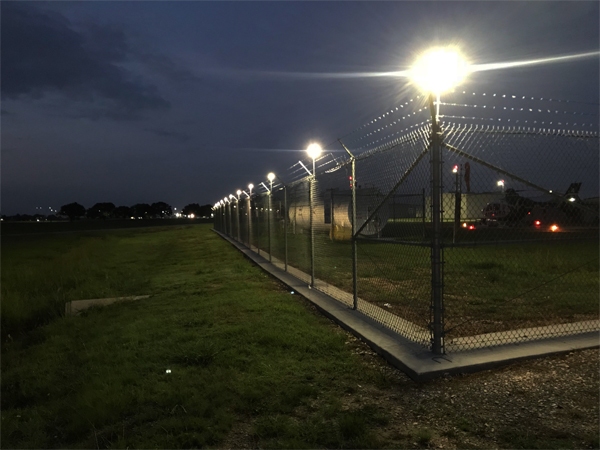 Most lighting designs use the common horizontal lux or foot candle light distribution plot to design a lighting system layout. This plot is essentially a scaled numeric rendering displaying in a grid format of the light that will fall on the “horizontal” ground surface using a chosen lumen fixture, beam spread, fixture spacing  and mounting height. So, imagine turning on the lights in your office. The light that hits the ground is the horizontal ground surface or horizontal illuminance. Now, hold that thought as we explain vertical illuminance.

If you’re still imagining the office scenario we just described, vertical illuminance is the light that reflects off walls and lands on objects or a person’s face. Previously, vertical illuminance was disregarded, but as security lighting experts, we began carefully exploring this as a valuable security tool. According to the IESNA, “one lux of vertical illuminance is sufficient to obtain a 90 percent probability of correct detection of an approaching person (but not facial recognition).” The 2003 IESNA findings reported, “Facial recognition can be made at levels as low as 2.5 lux. The IESNA Security Lighting Committee recommends that for facial identification the minimum vertical illuminance should be 5.0 lux.” One inherent flaw when using pole-mounted fixtures mounted 20 feet or higher and typically spaced 100 or more feet apart is the difficulty projecting vertical illuminance on faces for identification, to read body language, to identify those who are familiar or threatening, and for security camera image capture. The CAST Perimeter™ lighting solution resolves this issue by placing fixtures typically 10 to 12 feet off grade with spacing of 20 to 30 feet apart. This provides a light closer to the subject and better, more directed light that delivers both horizontal and vertical illuminance to enhance both camera imaging and on-site security detection.

We believe uniformity of light is far more important than the amount of light falling on the ground. Even, consistent light distribution spread across an entire perimeter fence line is critical to avoid eye fatigue, eye strain, and quality night camera images.  Avoiding contrasting brightness levels, especially total darkness (what we call “black holes”) to full brightness (“light bombs,”) is paramount for security personnel and camera systems. These site conditions must be avoided at all costs. Such extremes of uneven light levels severely reduce an individual’s ability to process images and capture site-specific threats. Using the CAST Perimeter™ Security Lighting system, you provide even and consistent light distribution across an entire fence line or property border, which eliminates hot spots, black holes, or light bombs with a light level that bleeds off gradually into the darkness to extend the range of the viewing field. According the IESNA, light uniformity refers to the evenness of light distribution on surfaces. For security, the lower the minimum to maximum, the better the eye adaptation at night. This reduces the necessity for eye adjustment when scanning or using an area, making it more comfortable and effective for guards to do their job while improving the CCTV camera images at the same time. A common uniformity ratio for security lighting is 4:1 minimum to maximum horizontal illumination—the light falling on the ground. Take note: 10 lux divided by 2.5 lux equals the 4:1 ratio.

The human eye has an amazingly effective working range. For example, the brightest full moon—a harvest moon—is only .108 lux while the typical lux value on a sunny summer day at noon is 107,527 lux. Most high quality 2-megapixel cameras and the human eye operate quite well at between 2 to 4 lux. The CAST Perimeter™ Security Lighting system delivers the right light lux level for both effective camera imaging and optimal eye performance at night with the added benefit of greatly reduced glare for both. This achieves the main objective of producing a more secure site condition.

Legacy pole-mounted light covers much larger areas, but, this isn’t a solution by itself. The typical pole spacing is usually 100 feet, or 30 meters, apart. However, should a legacy pole-mounted fixture fail, the resulting unlit area is considerable, which creates significant vulnerability to the security of the perimeter. CAST’s Perimeter™ Lighting System, on the other hand, spaces poles typically 20 feet (6.09 meters) to 30 feet ( 9.0 meters)  apart for added security. Should a CAST perimeter fixture fail or break, coverage is not completely lost as the two adjacent fixtures provide overlapping or backup light coverage. This redundancy is extremely valuable when properly securing a defensive perimeter.

Combination day/night surveillance cameras operate as two cameras in one: a day light camera during the day and in infrared camera at night. All video surveillance camera systems use some sort of digital storage to record events or perform video analytics, and the cleaner the image, the less storage space is required on the DVR or cloud storage system. Better image quality lowers bandwidth and maintains a high frame rate, providing better real-time video. Even the best night cameras provide “noisy” or fuzzy images in darkness. This noise on the screen, which resembles snow, is the result of low-light conditions, which can require 50 to 100 percent additional data storage than during daylight image capture. Thus, a need exists to improve surveillance images at night while, at the same time, reducing the data storage requirements of the system. This is especially important when dealing with large surveillance systems as the data space requirement can add up exponentially. The CAST Perimeter™ Security Lighting system applies the right amount of light to enhance camera image quality and also decreases the data storage requirements of the camera system at night. Producing Better Security Lighting Systems As you can see, there are vast and varied factors that play a significant role testing the effectiveness of a perimeter security lighting system: horizontal and vertical illuminance, the uniformity of light distribution, lux levels, camera imaging, glare, shadows reflectivity, changing surface conditions, and how the human eye interacts with light. Each of these influencers has revealed that today’s security lighting falls short. In the last several years, CAST Lighting has painstakingly studied and researched each and every one of these troublesome sticking points and carefully prototyped, tested, and developed security lighting products that have proven to be solutions to the industry’s biggest issues. As a result, CAST Lighting has developed the best line of active defense using perimeter security lighting.