The Pennsylvania State University undertook, as part of their Greenhouse Gas Reduction Initiative, the conversion of campus construction perimeter lighting from a traditional type to a new energy-efficient LED fence lighting solution. The new solution, the CAST Lighting LED Perimeter Lighting System (winner of 7 security and lighting industry awards) resulted in an 87% savings in electrical consumption.

CAST Lighting, a premier manufacturer of outdoor security and landscape lighting systems, released today a case study of the successful conversion of a traditional construction site lighting system to a new LED system. The site of the conversion was the campus of the Pennsylvania State University (Penn State) in State College, PA. Most institutions (like Penn State) seek many avenues to reduce energy consumption. This was the primary goal when the university and its partner, Massaro Construction Management, sought an energy-efficient solution to provide security lighting for perimeter fences around construction areas. The previous lighting solution was inefficient and problematic in several ways. The new solution, CAST Lighting’s award-winning LED Perimeter Lighting System promised to satisfy all the security and safety needs while supporting the university’s Greenhouse Gas Reduction Initiatives.

Massaro Construction Management Services, LLC., a construction management company, was hired for a number of construction projects on the campus of The Pennsylvania State University in State College, PA. Temporary chain-link fences with driven postswere installed around the perimeters of all construction areas by Massaro’s subcontractor, John Nastase Construction. Some perimeters were adjacent to high-traffic walkways; others were located in garden or lawn areas. Both situations necessitated lighting to enhance security and safety. Massaro typically used 120-volt work lights strung along fences, mounted by hooks – each one protected in a glass-enclosed cage. This type of lighting presented many problems – only one side of fence could be illuminated, glass enclosures were subject to breakage, energy consumption was high, and 120-volt currents presented a safety risk.

CAST Lighting, a low-voltage lighting manufacturer, supplied a CAST LED Perimeter Lighting System customized with quick-connects so lights could be rapidly deployed and moved to accommodate temporary fencing needs. This system, introduced in 2012, won 7 security and lighting industry awards including “The Most Innovative Product of the Year” (LightFair 2012) and awards from ASIS, Security Sales and Integration, Architectural Products, Architectural SSL, and others. The unique features of the system include how it is mounted, its energy-efficiency, its highly targeted light output, its fast installation, and durability.

CAST Lighting provided (93) LED Perimeter Lights – each with a quick connect plug. These lights were designed to be mounted every 20 feet (every other vertical fence post) along temporary chain link fencing. Long wire pieces were provided with quick-connects every 20 feet to connect the fixtures to the 24-volt power supply. Wires were affixed to fences with removable cable ties. Two CAST Lighting Perimeter transformers supplied power to the entire system. On/Off times were controlled with a built-in timers and photocells. In total, 1,860 ft. of temporary fencing was illuminated with the system. Total installation time with a 4-man crew was less than 4 hrs.   [caption id="attachment_512" align="alignnone" width="762"] 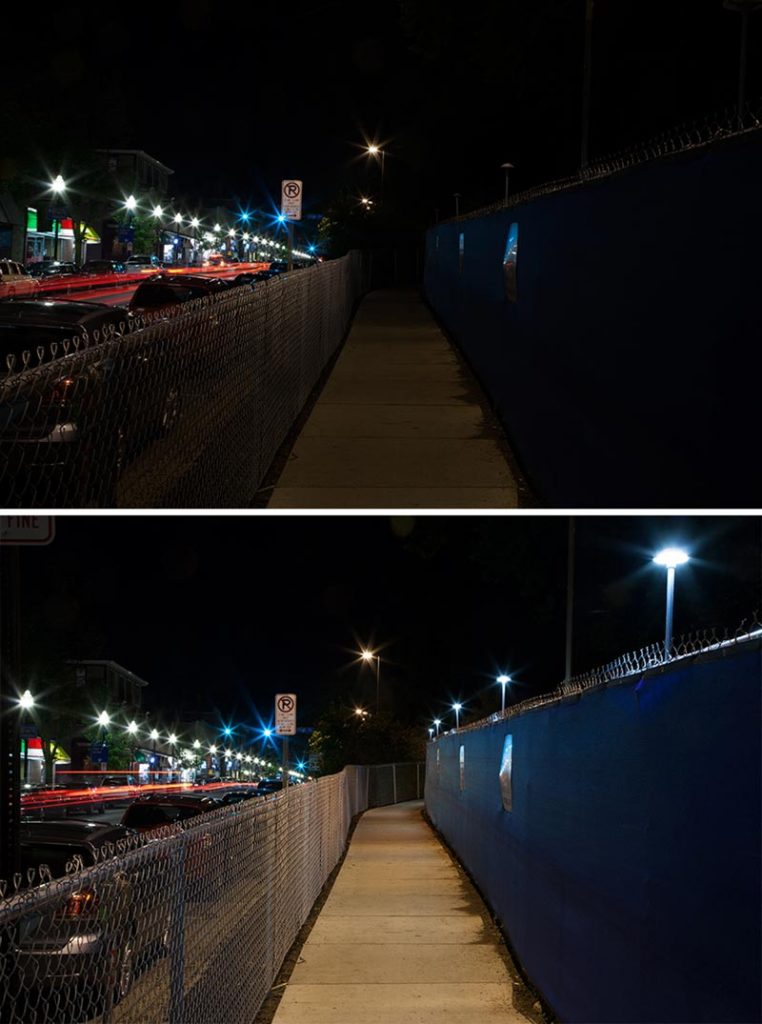 Before and after light installation[/caption]

There were several problems to be addressed:

“From a construction perspective, I have been impressed and pleased with the Cast Lighting installed on our project at Penn State. The easy installation and the amount of light provided on both sides of the perimeter fences have made our site safer and more secure than ever. I have also been amazed with the low energy cost associated with the product which is a benefit to the owner. With a greater demand for Green Building in our industry, it’s nice to start a project off with leading by example, using less energy throughout our work – starting with our perimeter fence lighting.” (Jim Kephart, Site Manager, Massaro Construction Management, LLC.)

“The Pennsylvania State University is strongly committed to energy conservation and this project supports the Office of Physical Plant Green House Gas Reduction initiatives. The ease of installation, portability to other jobs sites, increased illumination levels, enhanced safety and security, all at reduced energy consumption makes this type of application a win-win for everyone involved.” (Jeff Kokoskie, PE; Manager, Construction Services; The Pennsylvania State University)

All prior problems were successfully addressed by the new CAST Portable LED Perimeter Lighting System. Construction personnel from Penn State’s Office of Physical Plant expressed high praises for the lights. They not only appreciate the specific issues addressed above, they also like the daytime appearance of the lights, and the glare-free people-friendly illumination at night. Download print version of this press release. Watch a recorded webinar on Perimeter Lighting Visit the CAST LED Perimeter Lighting web page Contact CAST Lighting for help with a project